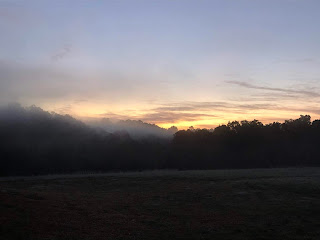 Much as we love the house with its energy superpowers, it’s still just base camp for what we’re really doing: enjoying, learning from, and prospering the little corner of earth we live in. Every day brings new insight—about wildlife, about tools, about how things grow. And just for the record, for people who keep asking about volume 2 of my Isaiah commentary: yes, I’m doing that too. Isaiah in the morning, farming in the afternoon. A good balance.

Recently some neighbors, older lifelong residents, were telling about the family that owned these acres nearly a hundred years ago—or maybe more. Two brothers and two sisters all named Schwein, none ever married. I had found them listed on the 1940 census, along with their father, who emigrated from Switzerland. Our neighbor remembers planting corn for them on our house site decades ago. That may have been the only conventional thing the Schweins did. They owned exotic animals—peacocks roamed the farm, and their house was filled with cockatiels and other colorful birds. The last remaining brother sold the place in the 1970s to our predecessor, who dug the pond and kept the fields neatly mowed.

For years we’ve cultivated trees, letting some fields grow back into the forests that used to cover Indiana. When we first planted a patch of oaks and poplars, they seemed artificial, straight rows of tiny whips. But nature has a way of taking charge. Now other species, sycamores, pines, cedars, have volunteered themselves to fill in. Deer, hawks, rabbits find cover there. Every time we drive in or out, a half dozen trotting turkeys lead the way.

As newcomers, we feel wonder at the bullfrogs and turtles, the single chipmunk, the bossy red-winged blackbird and curious hummingbirds, indigo buntings, great blue herons, kingfishers; the tadpoles growing in muddy puddles around our construction site, which the builder’s son and I rescued from a concrete tomb, and fed in pails until they sprouted legs and jumped away (they eat boiled lettuce, by the way); the dazzling monarchs and swallowtails, dragonflies, spiders, lizards, hundreds of ladybugs; elusive snakes and crawdads. One day this week I glanced outside and saw a single duck swimming in the pond: a hooded merganser, something we’d never seen here and nearly missed. It all lends urgency to pay attention. 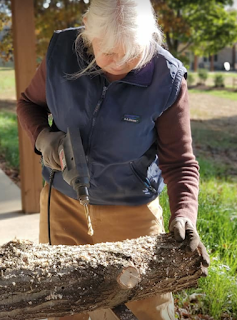 Carrying on the tradition of trying the weird, I’ve planted not only lettuce, spinach, Swiss chard, asparagus, garlic, and shallots in my Hugelkultur mounds, and several varieties of berries and other perennial fruit in beds around the house. I’ve also started some mushrooms. On a recent visit, my brother and sister-in-law helped me harvest some oak logs and drill shiitake plugs into them, and these are stacked by the barn waiting for the mycelium to inoculate the logs and begin fruiting.

Until recently, morel mushrooms could not be cultivated, only found wild. We once paid $25 for a small bag at a morel festival, and found them pure deliciousness. Now some farmers are growing them. There being no consensus yet on how it’s done, we don’t know what we're doing. Yesterday, after tilling a 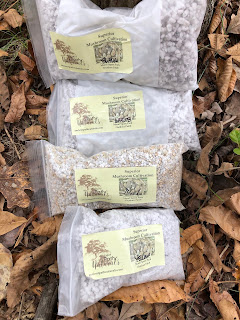 10’x10’ square under some trees, we spread peat moss, soil with compost, gypsum, and sand, and then I scooped up and added all the wood ashes I could find to simulate a burn site, and raked in spores of black, white, and yellow morels. We’ll see if we grow anything besides a bad case of poison ivy.

When I used to lead trips to the Middle East, I felt awe at standing in places deemed holy for centuries and even millennia by residents and pilgrims from all over the world. But all that weight of glory is burdensome for clashing peoples, especially for those who lose it in the fray. At journey’s end I was always relieved to return to fly-over country—to a secret place that only we love. Now I’m content to stay. 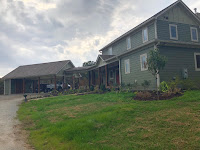 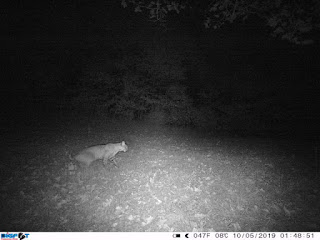 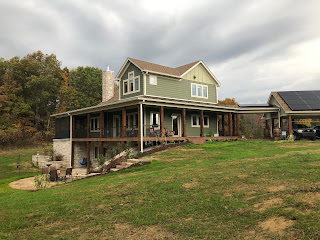 Our new home in Henryville, Indiana was completed at the end of July, and we moved in right away. So far, we’ve experienced drought and extreme heat; torrential rain; multiple visitors including our four grandchildren; sunny fall days; nights of stargazing; planting asparagus crowns, garlic, and shallots in our newly made Hugelkultur mounds and finding volunteer acorn squash growing out of them; learning the many uses of a good tractor and several battery-powered garden tools; converting loads of building material, especially pallets and window crates, into barn and shed shelving; viewing a bobcat, coyote, two foxes, and numerous deer and turkeys on our game cam; watching hummingbirds, chickadees, woodpeckers, nuthatches, tufted titmice flock to our bird feeders; learning new species of wildflowers like nodding bur-marigolds and ageratum; transplanting multitudes of plants from our city garden; finding a new organic supplier of berry plants near Bloomington and starting our strawberries, raspberries, blackberries, blueberries, cranberries, hardy kiwis, and figs; drilling holes in oak logs and hammering shiitake plugs into them; literally watching the grass grow that lay as dormant seed for six weeks until the rains came; harvesting abundant lettuce and basil; and discovering and harvesting persimmons that were growing next to the pond. 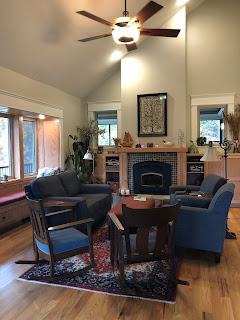 It’s hard not to get carried away with projects. What saves us now are the shift in seasons and the shorter days of fall. Now that the rains have begun, we can ease up on watering and trust that our plants are all taking root. Soon it will be time to mow fields and plan for the spring. This week I’ll begin using a fan and vent to cool down the root cellar, which this year only contains a couple baskets of farmer’s market potatoes and a few fall vegetables.

Our solar panels are working very well. Here are some drone pictures of them that our installer recently took. If you look REALLY close, we are sitting on the porch watching the drone with my brother and sister-in-law. I’ve become a true geek about our energy efficiency. My favorite app is our Tesla battery, which shows in real time how much the panels are producing, how much our house is using, how much is going back to the grid, and how much is stored in the battery. So far, we have sent more than twice as much back to the grid as we’ve taken. Since we pay four times as much for grid power than we receive in credit, plus another $37/month for the privilege of being connected, having a battery that stores our power for nights and cloudy days is a tremendous advantage. I can take the EV Bolt into Louisville to run errands while the house battery charges up, come home and charge up the car, and then refill the battery before sundown. 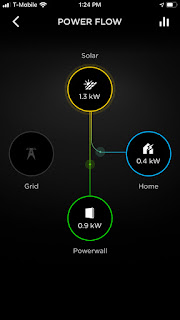 Speaking of the Bolt, we recently drove it to Winston-Salem, North Carolina, where I taught a class on scripture and creation care at Wake Forest Seminary. This would not have been possible a year ago. But VW’s settlement over their emissions cheating mandated the creation of Electrify America: the installation of hundreds of charging stations at Walmarts all over the country. In addition, many college campuses, including the two we visited, have free charging stations, and Chevy dealers likewise offer free superfast charging. 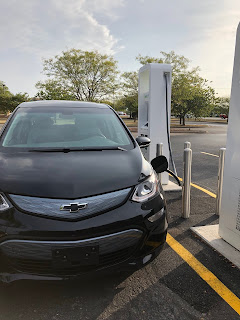 It does change the way you travel: we hopped from one station to the next, plugged in, set up beach chairs in the shade, and settled in for a half-hour read, rest, and often, conversation with a local who was curious about buying a Bolt and installing solar panels. Charging took more time, but it cost us less than driving the Prius would have, and even when the power source is coal, the fuel’s carbon footprint is lower than that of gasoline, and there is no exhaust pollution. Plus, it’s a sweet ride. 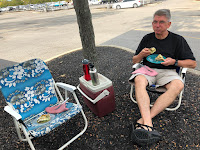 With the turning of the seasons, we’ve also turned on the geothermal in-floor radiant heat. It’s not what people expect—you can’t touch the floor and feel toasty, because it’s only 70 degrees. But along with the superb insulation and triple-pane windows, it noiselessly keeps us cozy, and hardly registers at all in our electric use. 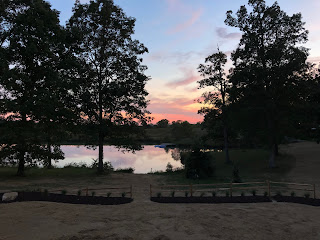 We love our life here at Lost Beagle Lake. It’s an oasis of serenity and sustainability in the midst of national insanity, and in one of the most environmentally regressive states in the country. What our life here will grow into remains to be seen. We hope that it will become a welcoming retreat for many, and an example of what can be done with some imagination and initiative (and a good builder!).

This coming week I am traveling to Washington D.C. to preach and lead workshops in three churches and at the National Capital Presbytery meeting on Tuesday. 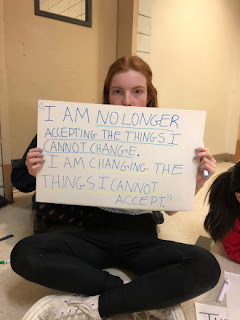 One of the workshops is a practical guide to energy conservation in homes and congregational buildings. I want to make workshop materials available for  attendees, but rather than xerox 16 pages per person I thought it would be more useful to include a link here so that anyone who would like can download the pages they would like to save, reproduce, share, etc. So here is the link to very useful energy-conservation checklists and guides developed by Hoosier Interfaith Power & Light when I worked there. 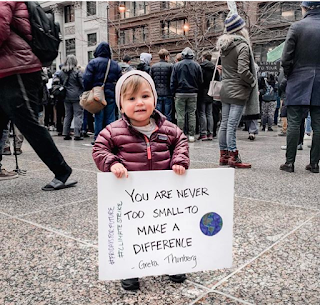 And for good measure, here are two of my favorite images from the March 15 worldwide youth climate strike...

Last Wednesday I was in the little town of Monmouth in western Illinois speaking to a group of faculty and students about food and faith. Monmouth College has a community garden which supplies produce to their food service as well as to the local farmer’s market. They also have a small farm to experiment with crops, and a high school
program sponsored by Lilly every summer on food security and faith. It was a stimulating conversation and I was grateful to get to know them. 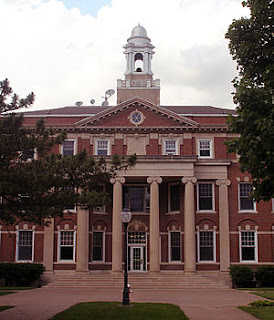 Sunday I preached on Genesis 9:8-17 at a small town church about 35 miles from home. I had never preached an environmental sermon at that church before, but was amazed and pleased at the response. Sometimes I underestimate the connections with nature that people in more rural areas have. This afternoon I am speaking in a class called “The Bible and the Environment” at Campbellsville University. Next month I’ll go to Washington D.C. for several speaking events.
The news continues to offer warnings that if we don’t tackle our carbon output in the next dozen years the consequences will be severe. Now that most Americans finally seem to believe that climate change is a threat to us, I hope as a nation we will find a way to agree on an effective and shovel ready solution. Sunday afternoon Don and I attended a start-up meeting of a local Citizens’ Climate Lobby chapter. This is a well-organized movement that advocates for a national fee-and-dividend solution. Their bipartisan bill is now in congress, H.R. 763, the “Energy Innovation and Carbon Dividend Act.” It is intended to drive down carbon pollution while also preserving human health and stimulating the economy.
In the meantime, I said I would describe the net-zero (we hope) house that Don and I are having built. It was designed by Ted Clifton, a builder on the west coast whose zero-energy homes have set standards in building efficiency. I especially like the video at the bottom of his home page that explains “the twelve essential steps to net zero energy.” I’ll supply details of how our house coheres with this plan in upcoming posts, in the meantime, here is our checklist: 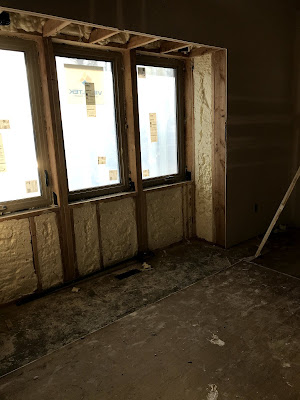 ·      Root cellars
·      Sealed vent fireplace
In this not so beautiful photo taken just before drywall, you can see the casement windows on a southwest-facing window seat, with the spray-foam insulation under and around.
You can also make out the concrete floor, which is now being covered with oak flooring.