In Defense of Clean Air

Last week my spouse Don and I traveled to Washington D.C. with a couple dozen others to petition our U.S. senators and reps to uphold the Clean Air Act.

I was astounded to hear it wasn’t the Clean Power Plan, the Green Climate Fund, or the Paris Accords that we were defending, but the 1970 Clean Air Act, that bipartisan plan emerging from the smog of the ‘60s to make air breathable again.

Until recently its provisions were a given—no one wants to fill our lungs with health-compromising particulates, right? But apparently, to hear the U.S. Congress on this, we do indeed enjoy breathing crud. Some public servants, elected to represent us, seem to think we citizens want to kill ourselves with ozone, bronchitis, heart disease, asthma, and cancer. Another right—this time the right to breathe—appears under attack.

But since attacks on clean air are unpopular with citizens, even in 2017, Congress isn’t going about this head-on so much as chipping away at good legislation already achieved, piece by piece.

With the help of Earthjustice, the nonprofit environmental law firm that defends healthy communities, clean energy, and nature, seven from Indiana traveled to D.C. specifically to discuss with our legislative aides two unfavorable measures:

·      S. 951, the so-called Regulatory Accountability Act, which is designed to unleash what Earthjustice calls “an avalanche of bureaucratic hurdles and litigations by polluters,” crippling the government’s ability to protect communities and the environment. Far from making government leaner, it creates 53 new barriers to safeguards for food, workplaces, and communities, including not only environmental pollutants but predatory lending. It renders some rules non-reviewable by courts. It favors polluters over scientific and public input, and allows industries to tie up new rules benefit the public in court for years. It weakens the extent that government—even if it wants to—can protect citizens from deep-pocket polluters, and it has already been passed by the House.

·      HR. 806/S. 263, being considered in both houses, is the so-called “Ozone Standards Implementation Act,” but it’s just the opposite of what its name implies. According to Earthjustice and others, a better name is the “Smoggy Skies Act.” It proposes an eight-year delay of ozone standards that were already passed in 2015. A mere 60 parts per billion (ppb) of ozone, or smog, causes health-endangering risks not just of haze but of asthma, heart attacks, low birth weight, and premature deaths. The new standard reduces the acceptable level from 75 to 70 ppb (still too high but an improvement). More than 1/3 of Americans—116.5 million people—live in locations with unsafe ozone levels, many low-income families who cannot afford the health compromises, lost work days, and daily distress of being unable to breathe. So delaying this ten years means that much more health burden on more growing bodies.

After an extremely helpful orientation by Earthjustice folks, our group spoke with aides in the offices of Senators Joe Donnelly (very receptive) and Todd Young (at least spoke with us) as well as several House Republicans and Democrats.

One Hoosier, the Rev. Daryl Emowrey, a young Lutheran pastor serving in Angola, spoke to
every official about God’s breathing the breath of life into the first human being, bringing the creature to life. Connecting God’s life-giving breath to the life-sustaining air of our atmosphere, he pleaded that our air not continue becoming a source of death instead.

Two Hoosiers, Akeeshea Daniels and Tara Adams from East Chicago in Northwest Indiana—where lead contamination in the soil from a former smelting factory has stricken many children, and industrial air pollution is among the country’s worst—gave heart-rending testimony about watching their own children fall ill from asthma and other respiratory diseases, and needing to use inhalers themselves.

Kathy Watson, an Indianapolis environmental attorney who understands the ins and outs of this legislation better than any of us, outlined the costs of both of these bills to our state, as well as the local benefits of reducing ozone levels.

Andrew Turba, a Hoosier Interfaith Power & Light supporter from South Bend, told what his own church has done to conserve energy, and the economic as well as spiritual benefits this work has brought the congregation.

I talked about how the seven months of treatment I just endured underscored the waste to health, pocketbook, peace, and life that cancer poses. Air pollution is a leading cause of cancer, even compromising the health of unborn babies. My heart breaks, knowing what that purgatory is like even in the most favorable of circumstances, over consigning young mothers and children to the disease just to keep our air dirty.

Don discussed a toxic industry in Rockwood, Tennessee, where he was pastor, that was turning the townspeople’s clothing and tennis shoes gray. They fought long and hard to get the pollution controlled, and ultimately the industry had to buy out a whole neighborhood. Through the battle, regulators repeatedly told them that citizen protection was only as strong as the laws in place.

So why we would want to weaken what protects us?

If I were a legislator, I would have been very moved to meet with citizens like us. But were we effective? Aides meet all day long with lobbyists advocating for their causes. Yet it’s amazing how often I’ve heard, “This bill is not on our radar—thanks for bringing it to our attention.” I want to believe that as broken as our system seems today, democracy still functions, and some politicians are still responsive leaders.

It’s shocking that the Clean Air Act, one of the foundational American achievements of my youth, is up for grabs now. But I thank God that Earthjustice and other environmental watchdogs are there to skillfully guide ordinary citizens to know and claim our rights.
Posted by Trisha Tull at 2:48 PM 1 comment:

Executive Branch Has Left Paris—But Americans Are Still There. Let’s Show How We Stay. 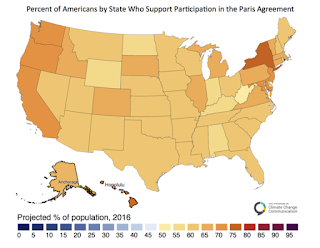 A majority of citizens in all 50 states supports continued U.S. participation in the 2015 Paris climate accord, as this Yale research on American opinion shows. About half of Trump supporters do as well. But not the White House. Last Thursday afternoon President Trump announced that he will begin the process of withdrawing the U.S. from the historic agreement to work with 196 other countries to curb carbon and fight together against the threat of global warming. Read statements from a variety of religious groups here.

Whether we are surprised by this decision or not, those of us who believe it’s our moral duty to act now to help bring humanity to a healthy and sustainable future are being galvanized. Hoosier Interfaith Power & Light is, in one sense, an amazingly small organization, with three part time staff members and eleven board members. But we’re also dozens of very active volunteers and supporters, hundreds of readers, and thousands of Hoosiers who have been touched by H-IPL’s work in Indiana—not to mention the tens of thousands people who have been moved to action by Interfaith Power & Light chapters in forty other states.

The 2012 book Beautiful Trouble: A Toolbox for Revolution describes what the Student 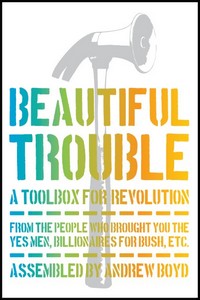 Nonviolent Coordinating Committee (SNCC) did in 1964 to garner support for civil rights in the American South: instead of bemoaning and berating the racists around them, they decided to activate their passive supporters: students in the north who were sympathetic and only needed an entry point to get moving. So they sent buses to bring people to the south for “Freedom Summer.” The students, coming in droves, saw firsthand what racial hatred looked like, and wrote back to parents about their experiences—galvanizing them—and thus created a profound shift in American culture and law.

So here are your test questions for today:

if you are already an environmental activist—that is, if you go to some trouble to live out your love for creation by organizing, communicating, reducing carbon, or otherwise reflecting your environmental commitments in your daily activities—which “passive allies” in your world can you invite to join you?

If you are a passive supporter—that is, if you agree that someone ought to do something about climate change—what will you do to activate yourself?

Would you like to donate money to an environmental organization, such as one of your state's chapters of Interfaith Power & Light? That will help, and be much appreciated!

Would you like to pick up the phone or pen and communicate with your legislator, and voice your opinion about Paris, the Clean Power Plan, or other environmental matters that are before us now? That, too, will mean a lot!

How about getting over to Home Depot for a dozen or two LEDs and installing them in your home—and your friends’ homes—and then signing up to monitor your utility use?

Or giving a testimony in worship about what creation means to you?

Or asking your local utility to give you a free home energy audit?

Or tending a vegetable garden with your children or your neighbor’s children?

Or starting a book club to read about environmental issues, or a working group to tackle a pressing local problem?

Or taking the time to research which products, from which companies, are sustainably developed—from clothing to food to appliances to travel options—and basing your shopping decisions on what you learn?

… and, having felt that wonderful “acting on your values” whoosh, moving on to larger and greater actions. Let’s show the world how America's citizens stay engaged with the world’s 196 sanest countries!

Posted by Trisha Tull at 5:37 PM No comments: