A great joy of driving through the midwest is seeing the growth of wind farms. Despite its poor record on climate preparedness, Indiana is ranked 12th in the nation in wind power. 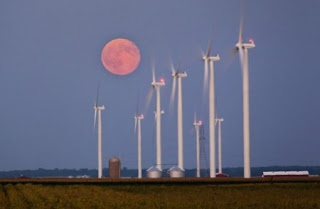 Fowler Ridge in northwest Indiana, for instance, with its 600 MW capacity, is one of the largest in the U.S., while the 500 MW Meadow Lake wind farm straddles I 65 north of Lafayette, Indiana on the way to Chicago (see photo).

Yet much misinformation still churns about wind power. Once a couple of years ago I was preaching in a church in southern Indiana and got into a conversation with a woman afterward. She was expressing appreciation for my discussion from the pulpit of the spill of coal-processing chemicals near her hometown in West Virginia, which had contaminated the drinking water of 300,000 people.

As we talked, I said something about the importance of clean energy such as solar and wind. "Oh, wind farms," she said. "I hate them. They are ugly and they kill birds."

I find them magnificent, far more stately than utility poles, cell phone towers, and coal smokestacks. But it's difficult to argue with someone else's aesthetics.

I had heard the claim about birds several times before, and decided to look into it. Answers are not hard to find. Here, for instance, are some statistics about the leading human causes of bird mortality, with a link here specific to wind farms. Windows and house cats top the list, and non-renewable forms of energy are much greater culprits.
The bird-killing windmill story goes back to one forty-year-old California wind farm, Altamont Winds, whose turbines had been badly sited, and have undergone replacement, saving a large majority of birds.

I mention this now because our new President-elect has been making uninformed claims about wind. In his interview with the New York Times last week he said the following: 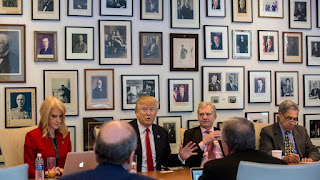 "The wind is a very deceiving thing. First of all, we don’t make the windmills in the United States. They’re made in Germany and Japan. They’re made out of massive amounts of steel, which goes into the atmosphere, whether it’s in our country or not, it goes into the atmosphere. The windmills kill birds and the windmills need massive subsidies. In other words, we’re subsidizing wind mills all over this country. I mean, for the most part they don’t work. I don’t think they work at all without subsidy, and that bothers me, and they kill all the birds. You go to a windmill, you know in California they have the, what is it? The golden eagle? And they’re like, if you shoot a golden eagle, they go to jail for five years and yet they kill them by, they actually have to get permits that they’re only allowed to kill 30 or something in one year. The windmills are devastating to the bird population, O.K. With that being said, there’s a place for them. But they do need subsidy. So, if I talk negatively. I’ve been saying the same thing for years about you know, the wind industry. I wouldn’t want to subsidize it. Some environmentalists agree with me very much because of all of the things I just said, including the birds, and some don’t. But it’s hard to explain. I don’t care about anything having to do with anything having to do with anything other than the country."

In response to these claims, the American Wind Energy Association published the following

President-elect Trump recently stated inaccurate claims about American wind power. The comments were made in an interview with reporters, editors and opinion columnists from The New York Times. A full transcript can be found here: http://nyti.ms/2g3w2Iw but feel free to use the facts below to respond to each statement or inaccuracy:

·       Claim: “We don’t make the windmills in the United States. They’re made in Germany and Japan.” Or “Most of ‘em are made in Germany, most of ‘em are made, you know, Siemens and the Chinese are making most of them.”
·       Fact: Over 21,000 U.S. factory workers make a majority of American wind farm content right here in the USA: http://bit.ly/2bRfkcV and here http://bit.ly/2bcaqX8.

·       Claim: “They’re made out of massive amounts of steel, which goes into the atmosphere, whether it’s in our country or not, it goes into the atmosphere.”
·       Fact: A typical wind project repays its carbon footprint in six months or less, providing decades of zero emission energy that displaces fossil fuel energy: http://bit.ly/2gg0TRx. Wind power is one of the biggest, fastest, cheapest ways states cut carbon pollution and avoids 132 million metric tons of carbon dioxide a year in the U.S. – or 28 million cars worth of carbon emissions: http://bit.ly/1pc1O9x.

·       Claim: “The windmills kill birds and the windmills need massive subsidies. In other words, we’re subsidizing wind mills all over this country.”
·       Fact: Wind power has among the lowest impacts on wildlife of any way to make electricity. Leading wildlife groups like the Audubon Society, the National Wildlife Federation, and the World Wildlife Fund support responsibility sited wind turbines. Wind energy is the low-cost solution to carbon pollution in particular which threatens all wildlife. Unlike all other human sources, the wind industry works to minimize and offset the limited impacts it has on individual birds, building on a legacy of care for birds and environment: http://bit.ly/1TUMauj

·       Claim: “I mean, for the most part they don’t work. I don’t think they work at all without subsidy, and that bothers me, and they kill all the birds.”
·       Fact: All forms of energy have incentives, most of them permanent in the tax code. The only ones preparing to phase out their incentives are wind and the other renewable industries. The wind Production Tax Credit is set to phase out starting next year. Thanks to performance-based tax policy, the U.S. is number one in the world in wind energy production, supplying enough electricity to reliably power 20 million American homes: http://bit.ly/1TUMauj

For additional fact check resources, you can see the following links:

Posted by Trisha Tull at 9:14 AM No comments:

I was on my way to several days of meetings in Indianapolis this past Wednesday, having said to various family members and friends, "please pray for me!," when I received a couple of emails--one from a friend and one from a stranger--about that very thing: they

were praying for me, and for us.

Turns out the Presbyterian Church's Mission Yearbook writers had taken a press release about an energy conservation workshop held at our church in October and turned it into a story and a prayer. So alongside of people suffering from Alzheimer's and their caregivers (Sunday), polluted rivers in Bolivia (Monday), partnerships in Honduras (Tuesday), police and protesters in Charlotte (Thursday), political turmoil in Haiti (Friday), and hope in Nicaragua (Saturday), a mid-sized church in a little Indiana town, and an upstart environmental organization in a beleaguered state, got a national boost. I hope it was as good news for readers of the Mission Yearbook as it was for us.

In addition, the online Christian social justice journal Unbound came out with my story about collaboration between previously divided forces seeking ways to combat climate change.

And Xavier University in Cincinnati has now published a webpage to advertise our Ignatian Journey to the Holy Land, which is coming up next May.
Posted by Trisha Tull at 2:55 PM No comments:

Collaboration--what a concept in the nonstop world of competitive partisanship, where 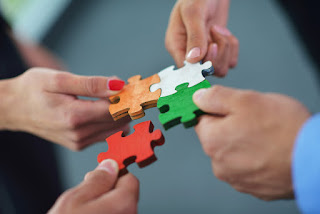 millions are spent promoting one message, one candidate, one worldview over against another, while children skip meals.

The day before the crashing finale of the most disturbing presidential race ever, "bipartisan" seems pretty remote. But it is happening in some places. Groups like the Friends Committee on National Legislation have worked hard toward bipartisan political solutions. Read here about their game-changing behind-the-scenes work especially with Republican legislators concerned about climate change.

Here's another promising start: I've begun reading Getting to Green: Saving Nature: A Bipartisan Solution, by Frederic C. Rich, a book with a hopeful (though colon heavy) title. I look forward to getting past a prologue that surveys the same sad inactions that tie climate activists' stomachs in knots, and reading his proposed solutions.

Hope comes in smaller doses too. Presbyterians from Fossil Free PCUSA (pro-divestment), Faithful Alternatives (anti-divestment), and the Presbyterian Church's Mission Responsibility through Investment team (selective divestment), three groups that had competed to win a breakthrough at the Presbyterian General Assembly in June--and all lost out to a weirdly broken process--sat down together to collaborate on what all could agree on, and to create a shared plan to help reduce the church's carbon footprint on many fronts: not only the supply side (energy industry) but also the demand side (Presbyteries, churches, individuals). Perhaps we'll no longer be asked to choose among parties that--unlike our political parties--agree on the essentials.

Since I was blessed to sit at that Texas table, Fossil Free leader Abby Mohaupt invited me to write about the meeting. As I say in this blog post for Fossil Free, the day reminded me of a classroom exercise at that very seminary years ago, which taught the definitive superiority of collaboration over competition. I was happy to see the article reposted by the Presbyterian Foundation's Facebook page five minutes later. You can read it here.... or wait to see it soon in the online justice journal Unbound.

In the meantime, prayers for our country's future, and our world's.
Posted by Trisha Tull at 5:49 AM No comments: