May must be Audio Month. On the same day I gave one of the Spirit Is Willing webinars with Georgia Interfaith Power & Light, I also had a radio interview with the Rev. John Shuck, who hosts Progressive Spirit on KBOO Community Radio out of Portland, Oregon, a show that has hosted the likes of Jim Wallis, Bishop John Shelby Spong, Bart Ehrman, and Diana Butler Bass. I'll also be preaching and teaching at Rev. Shuck's church, Southminster Presbyterian in Beaverton, Oregon while serving as moderator for the Social Justice Issues committee for the 222nd PC(USA) General Assembly in Portland in June.

On days my life doesn't seem all that exciting, I have to remind myself that, well, yes. The radio interview will be aired the first week of June, with a podcast available starting June 5.

More fascinating, and this is big....

Interfaith Power & Light's annual conference was earlier this month on the campus of Gallaudet University close to Capitol Hill in Washington D.C. There we learned a fascinating story from Emily Wirzba, who is policy associate for sustainable energy and environment at the Friends Committee on National Legislation, the United States' oldest nonpartisan, ecumenical lobby, whose office stands just across the street from the U.S. senate offices. 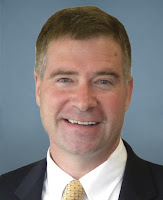 We all knew, of course, of the Gibson Resolution, introduced into the U.S. House of Representatives last September when Pope Francis visited to the U.S. and addressed Congress. In this resolution, Republican New York Representative Chris Gibson, along with ten other Republican reps, acknowledged the reality of climate change and called for better environmental stewardship. As Congressman Gibson told a reporter, addressing environmental issues are a core conservative principle. “If conservation isn’t conservative, then words have no meaning at all,” he said.

Ms. Wirzba told us there is more to the backstory than the news revealed. These break-with-leadership-join-morality congresspeople didn't just dream up by themselves the vision of going out on a limb for human survival. It was the Quakers who initiated it. (It’s worth remembering that the Quakers were also the radicals who, two centuries ago, led the charge for slavery’s abolition.)

It took years of effort to find the Republican representative who might introduce a resolution affirming the reality of the climate crisis, before a Quaker in his district, joined by an interfaith, delegation, approached the congressman asking him to sponsor this resolution.

Eleven--and now thirteen--representatives may not seem like enough to shift the conversation. But Ms. Wirzba told us that this move has quietly inaugurated fundamental shifts over the past several months. A bipartisan house solutions caucus has formed, Noah’s ark style--two by two, with equal numbers of Democrats and Republicans. A House Republican energy innovation and environment solutions working group has also begun meeting.
And in late April, Senator Lindsay Graham of South Carolina and nine colleagues introduced an amendment to an appropriations bill.  This amendment acknowledges that climate change is real, human-caused, and already affecting the U.S., posing risks to health, security, economy, and infrastructure, and that 180 other countries have committed themselves to reducing greenhouse gas emissions. It proposes that the U.S. become a world leader in addressing climate change, and that Congress take action. This is huge.
I am sometimes asked why churches should involve themselves with the “political” issue of climate change. The crisis has indeed been politicized by those who profit by delaying action. Yet shifting our practices to avoid the worst effects of a disaster already unfolding is at the root an ethical action, not a political one. Our faith compels us to protect the earth and the welfare of those living on it, present and future, and to exercise our citizenship in advocating for measures that will do so.
Back behind the ceaseless noise of the presidential election, history is quietly being made. And people of faith are making it. We are the unexpected visitors amidst a roll call of advocates, articulating values embedded in our faiths, values that affirm our responsibility to tend the earth that God so lovingly created.

Posted by Trisha Tull at 7:46 AM No comments:

The Spirit Is Willing and We Are Not Faint

Here are recordings of the three webinars in the series "The Spirit Is Willing and We Are Not Faint," cosponsored by Georgia Interfaith Power & Light and Hoosier IPL:

Posted by Trisha Tull at 6:25 PM No comments:

Lunchtime Webinar: The Spirit Is Willing and We Are Not Faint 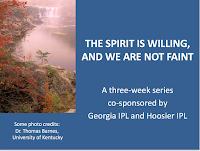 First the announcement: Three-part webinar in May, hosted by Georgia Interfaith Power & Light and led by me, coming up on Wednesdays (May 11, 18, 25), 12:00 noon Eastern. Here are the parts:
·      May 11: Rethinking Scripture, Humans, and Creation: Five perspectives for a creation care ethic grounded in faith.
·      May 18: Creating Social Movements for Change: Resources both historical and personal that power our drive to care for creation.
·      May 25: Shifting to a Flourishing Future: Stories and signposts for a future of ecological and social prosperity. 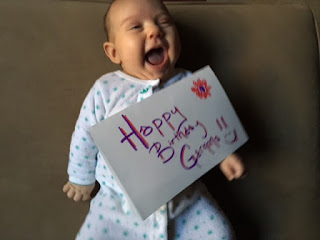 And now the excuses for my woeful silence over the past six months and my promise not to go AWOL again:

Excuse one: Two days after my last post, and three weeks early, my first blood granddaughter was born. And yes, grandparenting is all it’s cracked up to be. I could watch all day long as she discovers her hands, examines my face, and laughs at nothing more than the joy of life.

Excuse two: Then I went to Kenya and Tanzania to explore and to teach and preach in congregations of the Africa Inland
Church. And yes, life in the wild is unspeakably magnificent. I could spend all day watching a giraffe ramble across the road, or riding a pikipiki (hired motorcycle) up a country mountainside. Or, for that matter, planting tree seedlings with fans of Wangari Maathai, as these Christian volunteers are. 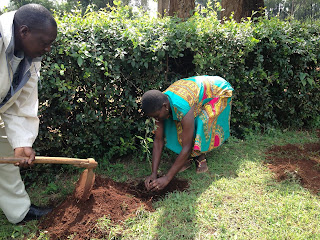 Excuse three, full disclosure: I shouldn’t mention this in an environmental column, but my spouse and I then went to New Zealand to visit our kids who moved there. But it’s true, we did, and I have the carbon offsets and guilt to prove it, and also the memories of misty Milford Sound, the most surreal scenery on earth, unless you count the iconically conical Mount Ngauruhoe (a.k.a., Middle Earth’s Mount Doom), or the sulfur-spewing hot mudholes of Rotorua, or the glowing worms dangling from the Waitomo Caves ceilings, or Oamaru’s steampunk downtown and playground, even without the penguins, or the haunting earthquake ruins 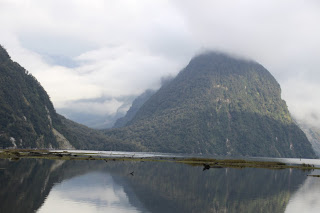 of Christchurch’s cathedral. How can two little islands hold so much, and polite people to boot?

Excuse four, and somehow not as exciting: Three days training to moderate the Social Justice Issues committee of the upcoming Presbyterian Church (USA) General Assembly in Portland, and three days of workshops and Capital Hill visits with Interfaith Power & Light in D.C. 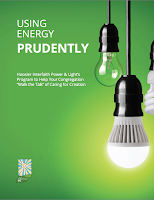 Then this and that busyness, writing a new energy conservation guide for Hoosier IPL, working on my Isaiah commentary, speaking to the evangelicals, the Presbyterians, the Quakers, the Catholics, the other Presbyterians, the seminary students, the elderly, the Methodists, the interfaith community, the political staffers, public radio, fourteen events in nine cities and more coming up. Being an ex-academic doesn’t pay much but it sure gets you into interesting conversations in fascinating places.

And I still love it when strangers announce that they are enjoying Inhabiting Eden, or when they suddenly buy five copies of the leader guide.

I'm suspending recaps of the PEC conference, will post the webinar recordings when they are completed, as well as another upcoming radio interview. And I promise to keep up better, yes I really do.
Posted by Trisha Tull at 10:44 AM No comments: