In a culture that can’t think past the next 24-hour news cycle, religion still reads stories hundreds of centuries deep. The Abrahamic faiths worship a God who shows “steadfast love to the thousandth generation” (Exod 34:7). 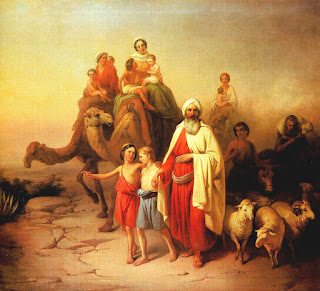 has a long horizon, to be fulfilled centuries later.

“Your offspring shall be aliens in a land that is not theirs, and shall be slaves there, and they shall be oppressed for four hundred years…. And they shall come back here in the fourth generation” (Gen 15:13, 16).

It’s odd that in the same speech God offers Abraham two different timelines. It’s not like God to be that forgetful, so biblical scholars usually chalk up this discrepancy to the Bible’s composite nature. We can take this strange speech as an opportunity to appreciate the Bible’s interest both in those we can imagine and those we can’t.

Four generations are imaginable. If we remember our great-grandparents and expect to have great-grandchildren, our minds already span seven generations.

It’s almost impossible to envision life four hundred years from now. Yet we look back to Abraham not four generations or four hundred years, but four thousand years. We look backward several millennia more clearly than Abraham could look forward even a few years.

This is an irony about the past and future. On the one hand we can know the past, but we can no longer change it. No matter how much we wish, we can’t change what ancestors did to create the world we know today. 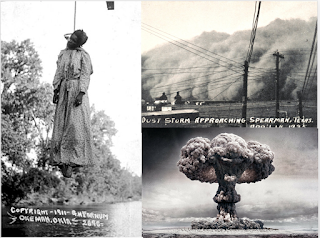 Yet by contrast, we can’t know the future, but we affect it every day. Looking back at what we can’t change helps us see ourselves through future generations’ eyes. We hope our descendants will look back to us with gratitude.

So even though our culture has an inch-long and inch-deep attention span, our faith calls us to lengthen our horizons to centuries and even millennia. So let’s add a third biblical claim: the interests of the unborn: According to the biblical story, “God directed our ancestors to look to the flourishing of future generations.”

Never having done this before, we sort of made up what you do when you consecrate solar panels. First Don gave a lovely sermon about the importance of acting as "conservators" of creation, based on Proverbs 27:23-27, "know well the condition of your flocks and herds." Then I gave a "moment for ministry" (listen here) about the project. Then, we all gathered outside. We read the first part of Psalm 19, which describes the sun as a "strong man running his course with joy." When the time came for laying on of hands, red and yellow streamers were tossed down from the panels for everyone to grasp as we said this prayer: 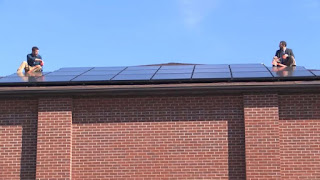 Creator God, we thank you for these solar panels,
for the people whose generosity and resourcefulness have made it possible for us to have them,
for those who designed and installed them,
for the power they will provide
and for this church home which they will serve.
Bless us with vision and energy for change
as we care for the earth and for each other,
in the name of God, the Father, Son and Holy Spirit.
Amen.

Then we sang (what else?) "This Little Light of Mine."

Two Louisville television stations, WHAS and WAVE, were on hand. Here is WAVE’s story. And here is last night’s great report on WHAS. 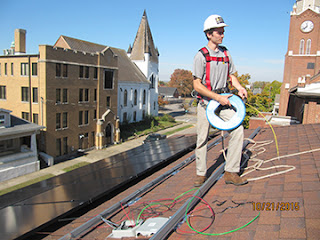 Our congregation is very grateful to the Indiana Office of Energy Development, who provided the grant to help fund this project; to Hoosier Interfaith Power & Light, who applied for the grant on our behalf along with four other congregations in Gary, Merrillville, Indianapolis, and Bloomington; to members who contributed; to our installers at Third Sun Solar; and to leaders with the vision and energy to bring this about.

Hoosier IPL structures such grants to maximize their benefits. Among other things, we have committed to several actions to fulfill the grant: we will strive to reduce our electricity and gas usage by 25%; our members will also conserve energy in their homes; we will host some events highlighting energy conservation and renewable energy for our neighbors and neighboring churches.

Our first solar forum will take place this Wednesday evening, November 18, with a chili supper at the church (222 Walnut, Jeffersonville, IN) followed by a presentation by Darrell Boggess from SIREN in Bloomington about the benefits of solar energy.

Soon I will continue the conversation on rethinking scripture....

My previous post discussed the biblical claim, derived from Genesis, Job, and Psalms, that God made the whole creation to flourish, and loves every being in it. In this post I'll describe the deep relationship scriptural writers draw between violence against humans and violence against the earth. 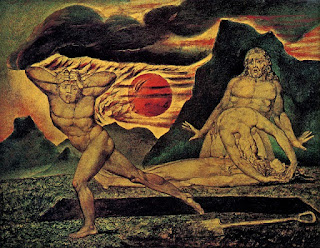 I used to have Hebrew students translate the Cain and Abel story in Genesis 4. A word that Hebrew students encounter more than once in a passage is celebrated as one less word to look up. So they would always notice the two words repeated over and over in this story: “brother” akh, appears seven times. And “ground,” adamah, is repeated six times. In addition, the words “field” and “earth” each appear twice.

In the past, readers have often paid attention to “brother” (as in, "Am I my brother's keeper?"). But they haven't often noticed the story’s focus on the land: “Your brother's blood is crying out to me from the ground!” Cain’s violence against his brother, it turns out, also pollutes the land, demonstrating the deep biblical connection between violence against neighbors and ecological violence. 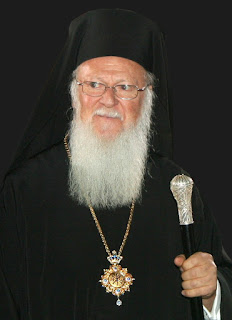 Scripture speaks often about the land being polluted with violence. According to Hosea 4:2-3, multiple human violations cause the land to “dry up,” (according to the NIV) or to “mourn” (according to the NRSV) and the creatures to perish. The same Hebrew word means both. People grieve through our voices, and the Hebrew imagines the earth grieving by becoming uninhabitable. Violations against neighbors violates the land itself, and its creatures.

Isaiah 5:8-10 likewise connects violence against neighbors with the land’s infertility, saying that people who practice what some might call eminent domain, and others, environmental injustice—taking other’s land and fields to enrich themselves—will end up with nothing, Isaiah warns.

Ezekiel 34:17-19 discusses environmental justice directly, describing it as the spoiling of land and water so others can no longer eat or drink. Here, violence done to the land becomes violence also to neighbors. The two are inseparable.

So here is a second biblical claim, rooted in the Cain and Abel story, and articulated by prophets: “Violence against humans and violence against nature are inseparable.” Because humans are so closely connected to the earth, we cannot harm one without harming the other. Fortunately, flipping this idea upside down, when we heal or prevent environmental pollution, human health improves. When we heal societies, the earth’s conditions improve.