GreenFaith Ground for Hope Conferences in Lexington and Louisville this weekend

Really looking forward to the GreenFaith Ground for Hope Bluegrass conference in Lexington this Saturday morning, 9:00-12:00, at Central Christian Church (205 East Short Street). I will be keynote speaker, and there will be workshops on creation themes in worship, religious education, and spiritual practice; on greening worship facilities; and on faith-based advocacy and fossil fuel divestment. The event is free and open to the public. Here is a link for more information and registration.

AND looking forward even more to the Louisville event on Sunday afternoon, 2:00-7:00 at Highland Baptist Church (1101 Cherokee Road). Keynote speaker will be Richard Cizik with panelists Sister Claire McGowen, Camille Helminski, and Rabbi Joe Rooks Rapport. Several workshops will be offered there as well--the ones from Lexington and more, plus interfaith worship. Free for students and seminarians, and $15 (to cover the reception afterward) for others. Here is a link for info and registration.

The Rev. Fletcher Harper will be teaching Sunday school and preaching at our church, First Presbyterian of Jeffersonville (222 Walnut St) through the weekend:
5:00 p.m. Saturday service
9:30 a.m. Sunday adult class, "Green our Faith: From Belief to Action for the Earth"
10:45 a.m. Sunday service

So glad to see the faith communities and environmental communities of Kentucky and Indiana pulling together for these crucial events.

Posted by Trisha Tull at 9:19 AM No comments:

Joining the swelling movement among churches, colleges, and cities across the country, last Saturday the Presbyteries of both Mid-Kentucky and Arkansas voted with six other presbyteries for an overture to the Presbyterian Church USA General Assembly recommending that the church divest from fossil fuel over the next five years, reinvesting our money instead in a future we--and the planet--can live with.

In Mid-Kentucky, several spoke for the motion, and only one against. The voice vote was decisive: we became the first presbytery in a coal state to endorse divestment from coal, gas, and oil, and investment in sustainability instead.

That afternoon I drove to West Virginia to talk about prophetic courage with Christians whose land has been deeply scarred by mountaintop removal, and whose water has been poisoned from chemicals used in coal processing. More about that later. 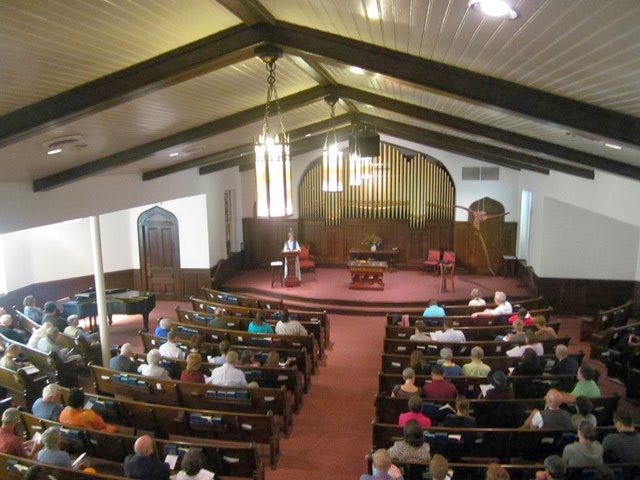 The Rev. Jane Larsen-Wigger, pastor of Crescent Hill Presbyterian Church, introduced the overture. I asked her permission to reproduce her words....

“Back in September our congregation’s Earth Care Team brought the overture to the PCUSA to divest from fossil fuels to our Session. As we sat in an air-conditioned room discussing whether to bring it to you, our own complicity in the issue of climate change did not escape us.