I wanted to make a table display, an un-powerpoint visual to take when I’m speaking, a reminder that what flows invisibly from the wall as electricity begins as burning rocks. I recalled that the basement of an old house where I once lived in Georgia still had a large pile of coal. A friend lives there now, so on a recent visit he let me excavate and carry a few pounds home.

I had looked up the figures here. In coal-dependent Indiana,1133.312 tons of coal are burned for electricity per year for every 100 people. So I did the math and put it in chapter 3, page 40: 62 pounds per person per day of coal, an astounding figure.

I rechecked it. How could 62 pounds of coal mined, transported, ground into powder, burned to boil water into steam to power turbines, and then disposed of as coal ash every day—and this is a bare simplification of the process’s many steps—how can all that cost so little?

Here is a news article on the Presbyterian Church (U.S.A.) website about Inhabiting Eden...

I am delighted with the many invitations to speak and teach coming up. Please do contact me if you would like me to speak, preach, lead a retreat, or introduce the book to your church or another group.

Next...on the problem of mistakes...! 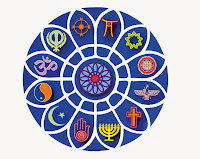 Read more »
Posted by Trisha Tull at 3:46 PM No comments:

It’s 27 degrees outside. I didn’t want to leave the cozy stove to make breakfast. So, 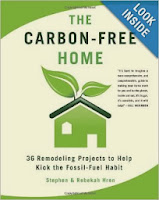 after a little inspirational reading, I tried an experiment I should have tried long ago.

The eggs and bread came from Esther and David Miller at the Jeffersonville Farmers’ Market (Winter Market is in our church’s gym). Butter came from an Amish farm nearby. I sliced a tomato from our garden to slip between toast and eggs, and added a dollop of applesauce on the side, made from apples from an abandoned tree three blocks away. Don chopped the fuel from our own fallen trees, the last of the ones that Hurricane Ike blew over in 2008. That fan, by the way, runs on the stove's own heat, and the catalytic combustor reburns the smoke so the stove's emission is no more than that of a cigarette, or so we are told. 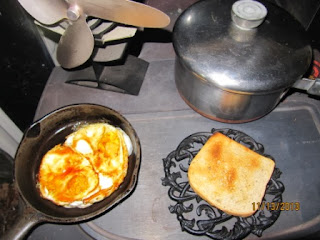 Yesterday I was leading a Sunday school discussion of environmental justice. A social worker pointed out the high incidence of cancer in neighbors of the industrial area known as Rubbertown in west Louisville. Others brought up radiation poisoning in Afghanistan from U.S. weapons, the problem of products (classically, lead paint, asbestos, and DDT) becoming widely used before their dangers are known, the deregulation pressure from industries that profit from pollution, the difficulty of knowing the sources of what we purchase.

Everyone was concerned; everyone felt helpless. What we knew, based on Scripture’s many calls to justice, was that the poor should not bear the burden of pollution in their bodies so that consumers can enjoy cheap products and investors can increase wealth they don’t need.

How Inhabiting Eden Came To Be

Soon after college, I wanted to build an earth-sheltered house with skills I didn’t possess, on land I didn’t own, in a place I’d never lived. Having been surprised to learn that Campbell’s had not actually invented soup, I would research prices at the grocery, and write little essays on the economics, and the joys, of actual cooking, and on how transubstantiation works: with a bit of salt, butter, and practice, flour becomes crust; peaches become pie.

I think I was absorbing my landlords’ unspoken ethics. She was a serene virtuoso in cotton prints, her grand piano flowing with Tchaikovsky and Brahms. He wore a Lincoln beard and walked to the university to teach engineering. We woke to his whistling and hammering every Saturday, and in the afternoon we smelled his bread. He sent us out with their children to pick beans, and taught us to refurbish windows.

Read more »
Posted by Trisha Tull at 3:43 PM No comments: